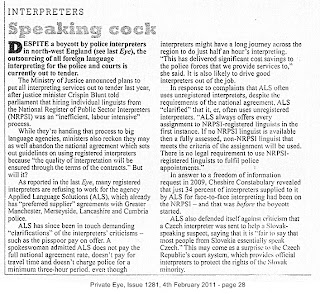 Speaking cock
Despite a boycott by police interpreters in north-west England (see last Eye), the outsourcing of all foreign language interpreting for the police and courts is currently out to tender.
The Ministry of Justice announced plans to put all interpreting services out to tender last year, after justice minister Crispin Blunt told parliament that hiring individual linguists from the National Register of Public Sector Interpreters [sic.] (NRPSI) was an "inefficient, labour intensive" process.
While they're handing that process to big language agencies, ministers also reckon they may as well abandon the national agreement which sets out guidelines on using registered interpreters because "the quality of interpretation will be ensured through the terms of the contracts." But will it?
As reported in the last Eye, many registered interpreters are refusing to work for the agency Applied Language Solutions (ALS), which already has "preferred supplier" agreements with Greater Manchester, Merseyside, Lancashire and Cumbria police.
ALS has since been in touch demanding "clarifications" of the interpreters' criticisms - such as the pisspoor pay on offer. A spokeswoman admitted ALS does not pay the full national agreement rate, doesn't pay for travel time and doesn't charge police for a minimum three-hour period, even though interpreters might have a long journey across the region to do just half an hour's interpreting. "This has delivered significant cost savings to the police forces that we provide services to," she said. It is also likely to drive good interpreters out of the job.
In response to complaints that ALS often uses unregistered interpreters, despite the requirements of the national agreement, ALS "clarified" that it, er, often uses unregistered interpreters. "ALS always offers every assignment to NRPSI-registered linguists in the first instance. If no NRPSI linguist is available then a fully assessed, non-NRPSI linguist that meets the criteria of the assignment will be used. There is no legal requirement to use NRPSI-registered linguists to fulfil police appointments."
In answer to a freedom of information request in 2009, Cheshire Constabulary revealed that just 34 per cent of interpreters supplied to it by ALS for face-to-face interpreting had been on the NRPSI - and that was before the boycott started.
ALS also defended itself against criticism that a Czech interpreter was sent to help a Slovak-speaking suspect, saying that it is "fair to say that most people from Slovakia essentially speak Czech." This may come as a surprise to the Czech Republic's court system, which provides official interpreters to protect the rights of the Slovak minority.

Row erupts over police interpreters
Detainees at police stations in four areas of the north-west are at risk of miscarriages of justice due to the police forces' use of inadequate interpreters, the Gazette has been told.
The Professional Interpreters Alliance (PIA) has been granted permission to begin a judicial review of a decision by police authorities in Greater Manchester, Merseyside, Lancashire and Cumbria to outsource their interpreting services and enter an exclusive agreement with Applied Language Solutions (ALS).
PIA, which represents the interests of interpreters who are registered with the National Register of Public Service Interpreters, alleges in its judicial review claim that commercial agencies such as ALS ‘compromise standards of quality of service by the use of unqualified interpreters'.
ALS denies the claims.
Rob Taberner, police station representative for Bolton firm Fieldings Porter, said that since the new contracts began in August, people who are not properly qualified have been sent to the police station to interpret. `They sometimes cannot translate properly and do not understand simple legal terms, which is a fundamental part of their job,' he said.
Where the police cannot get an agency interpreter before the custody time limit expires, Taberner said he had heard of detainees being charged and sent to court without a proper understanding of why they were there. `It's a farcical situation that could lead to miscarriages of justice,' said Taberner. 'They want a professional job done on the cheap.'
Lina Tsui-Cheung, an associate at Manchester firm ABM, said she had noticed a similar decline in standards since the new contracts began in August, and her firm had experienced `a lot of difficulties' under the new arrangement. `The agents are of poor competence. It appears to me that what is translated is not always correct, and clients have told me that they are not always able to understand the interpreter, or what they are being asked,' she said.
An ALS spokeswoman said: `The interpreters providing interpreting services to the criminal justice system have grave professional responsibilities. Work allocated to interpreters by Applied Language Solutions is done under the terms of the National Framework Agreement, which details the qualifications required to undertake legal interpreting assignments in the UK.' She added that it was `not true' that ALS interpreters struggle to understand basic terms.
Ian Kelcey, chair of the Law Society's criminal law committee, stressed the importance of properly qualified translators. 'Accurate interpretation at the police station is absolutely vital to avoid miscarriages of justice,' he said.

In their acknowledgment of service of the judicial review claim, the police authorities said they had undertaken a `rigorous procurement exercise' before awarding the contracts to ALS, which was ranked highest by the panel. They said: `The central aims of initiating the procurement process were the freeing up of administration resources, matching availability to demand, and control over the budget, without compromising the quality of the interpreters provided.'
The forces said they were satisfied that the interpreters engaged `would be provided as and when required and that they would be competent'.
Posted by PIA at 23:12 No comments: