“Speak Up, Speak Out”

NUPIT/Unite “Speak Up, Speak Out” campaign in support of the Public Service Interpreting profession

Speak Up, Speak Out campaign
The government has implemented its proposal to make changes to the provision of interpretation and translation services across the justice sector. The government stated that waste and costs needed to be cut, but that it would do so in a way that safeguarded quality. Now the government has signed a Framework Agreement with a commercial agency, namely Applied Language Solutions (ALS) for the provision of interpreters and translators in the Criminal Justice system.
Unite is concerned that the government has chosen a single provider, ignoring the concerns of the interpreting profession and other professionals in Criminal Justice. The danger of this sort of monopoly, which will be paid by the British taxpayer, will undercut professional standards and terms and conditions across the profession. Many professional interpreters are being forced to consider alternative careers due to the cuts in rates for assignments.
If interpreters are not adequately paid, the appropriately qualified individuals will not enter the profession and people in need will not get the service they require.
Interpreters play a vital role in the justice system in this country as they are a voice for people who cannot speak for themselves. If someone who cannot speak much English is the victim of a crime, witnesses wrongdoing or is accused of it themselves, they need to be able to put their point of view before justice can be done. How can they do this without interpretation by someone who knows both English and the foreign language well enough to make sure the message is put across with all the subtleties and fine distinctions which ensure that nothing is omitted or misunderstood?
Non UK citizens in this country who do not speak English are not all scroungers. Most of them work hard to provide services which give all of us a better life-style. They are here because we need them and they deserve to be properly treated by our justice system. It is not right to fob them off with second-best.
Unite wants you to help save professional interpreting and translation services by telling your MP the consequences that outsourcing services in the public sector will bring.

Lost for words
The Ministry of Justice (MoJ) has chosen a language agency for the outsourcing of court interpreting services which will be horribly familiar to Eye readers.
Yes, the supposedly cash-saving scheme will see all interpreting in courts in England and Wales handed to Applied Language Solutions (ALS), an agency so unpopular with language professionals that it faced a boycott and a legal challenged to its deal with four police forces in North West England (Eyes passim).
The Professional Interpreters Alliance was prepared to take that case to judicial review, but in March, before it reached court, the police caved in and admitted that thanks to its terrible relationship with people who actually do the work, ALS “might not be able to supply interpreters for every assignment of the same qualify and within the same time constraints as had been supplied under the previous arrangements.”
Not that this seemed to worry ALS boss Gavin Wheeldon. When the new deal was announced last week he boasted: “We have already achieved cost savings of up to 70 percent for existing customers within the criminal justice system”.
The Professional Interpreters Alliance noted in a submission to the MoJ that the desire to have all languages serviced at low cost by interpreters within 25 miles is “unrealistic” as “the use of commercial intermediaries will never make rare languages less rare”. As well as offering worse pay and conditions than registered interpreters were used to when dealing directly with the courts, ALS has been criticised for using linguists who are not registered public service interpreters.
The Scottish government made a similar decision two years ago, outsourcing the supply of interpreters for Scottish, the Procurator Fiscal Service and the NHS to a single company, Glasgow-based Global Language Services. Pay rates for interpreters were cut, travel expenses pinched… and yet figures released in April showed that court interpreting costs had doubled to £1.25m. Scottish lawyers and justice campaigners have criticised GLS for using unqualified interpreters in trials. Just last week, a rape and attempted murder trial was halted in Aberdeen after questions were raised about the accuracy of the Polish interpreter, both in asking questions and relaying the accused’s replies. The judge said the delay was “an unfortunate and unsatisfactory state of affairs”.
Private Eye, issue 1293, 22nd July 2011, Page 32.
Posted by PIA at 23:33 No comments:

MoJ in line of fire over interpreters contract

MoJ in line of fire over interpreters contract
The Ministry of Justice could face a legal challenge to its new cost-cutting arrangements for the provision of interpretation and translation services across the justice sector.
In a move expected to save at least £18m annually on its current £60m spend, the MoJ announced last week that is to contract with one supplier to provide language services to criminal justice agencies.
After a 12-month procurement process, Manchester-based Applied Language Solutions (ALS) has been awarded the contract to provide the services for the next five years, beginning as early as September.
Under the agreement, it will provide services for HM Courts and Tribunals Service and the National Offender Management Service.
The police and other organisations will also be able to use its services under the same framework agreement.
However, some professional organisations representing interpreters and translators have voiced concerns about the change and the consultation process leading up to it, and the quality standards of interpreters used by ALS.
A spokeswoman for one group, Professional Interpreters Alliance (PIA), said it is ‘seeking advice’ on what legal action it can take to challenge the MoJ’s decision.
To date, translation and interpretation services have been provided under a national agreement, which requires qualified interpreters to be registered with the Register of Public Service Interpreters (RPSI) and its sign-language equivalent.
Opponents of the new scheme, which will render the RPSI defunct, say it will lower the quality of language services provided.
They also claim the consultation process was conducted too quickly, and that the views of many respondents were ignored.
In a joint paper sent to the MoJ, seven interpreters’ groups including PIA, suggest that scrapping the national agreement is ‘unlawful’ and that the new arrangements are ‘procedurally flawed’ because no equality impact assessment was carried out until very late in the process.
They question the scale of savings that the MoJ will make, saying the figures are not based on any evidence.
The PIA spokeswoman also questioned the standards of service provided by interpreters employed by ALS.
Earlier this year, the group sought a judicial review of a move by four police forces to outsource their interpretation services in an exclusive contract with ALS.
The police admitted they had not conducted a proper impact assessment.
In a letter to stakeholders following the consultation on the new framework agreement, the MoJ said it had considered all responses, but did not share concerns that the new scheme would lower standards.
An ALS spokeswoman said: ‘ALS has demonstrated that it has the experience and the ability to deliver a reliable, quality service.
'There will always be rare occasions where it is difficult to find an interpreter at short notice, due to location or a specific language demand - and this is unavoidable regardless of the service provider.
'However, our fulfilment rates to date have been excellent and are not a source of concern for our existing customers.
‘From the official contract award date, quality control measures will be ascertained through an external and completely independent assessment process, developed and delivered by independent institutions.
'All interpreters currently working or planning to work in criminal justice settings will be required to have completed this assessment process successfully, which we believe will eliminate any risk of poor quality interpreting, which has been a concern to the profession for many years... All interpreters will [also] be required to complete annual continuing professional development work.’
Posted by PIA at 23:32 No comments: 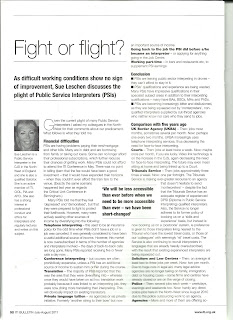 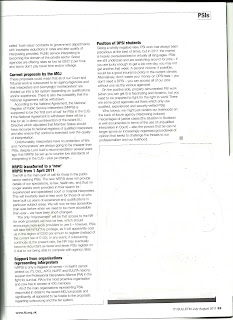 http://www.publications.parliament.uk/pa/cm201011/cmhansrd/cm110705/wmstext/110705m0001.htm#11070548000006
Justice
Interpretation and Translation Services
The Parliamentary Under-Secretary of State for Justice (Mr Crispin Blunt): Against a background of the need to make economies right across the public sector I announced, in a written ministerial statement on 15 September 2010, Official Report, column 46WS that the Government were proposing to make changes to the provision of interpretation and translation services across the justice sector to cut the cost and make more efficient provision while safeguarding quality.
In pursuit of that aim the Ministry of Justice conducted a competitive dialogue procurement process to explore how these services could be delivered more efficiently, before taking a decision on the way forward. That process resulted in a proposed framework agreement with a single supplier, under which justice sector organisations could contract for language services as needed. Having sought and taken account of the views of interested parties the Government have decided that a framework agreement is the best way to meet their objectives.
The Ministry of Justice will contract under the framework on behalf of Her Majesty’s Courts and Tribunal Service and the National Offender Management Service. Other justice sector organisations, including police forces, have indicated that they intend to sign contracts under the framework agreement as soon as they can. In some cases this will be when pre-existing contracts come to an end.
The framework agreement will deliver significant administrative and financial savings over the current approach. It will do this by introducing market forces into language services provision and providing a single point of contact available to staff at any time of day for the provision of all language services, including interpretation, translation and language services for the deaf and deaf-blind.
Language services will now be booked through various mechanisms including a secure internet portal, telephone or e-mail. This does away with the current time-consuming and inefficient process of making direct telephone contact with each individual interpreter to check their availability for work. A single request will be all that is required, reducing the burden on staff.
Interpreters’ details will be held centrally on a new register maintained by the supplier, which will be freely accessible to the justice sector and legal practitioners.
5 July 2011 : Column 87WS
The Government have always been clear however that efficiency cannot be at the expense of quality. Clear quality standards specify the qualifications and experience required for interpreters to work in the justice sector. A strict code of conduct sets out the high standard of professional conduct expected of them. A robust, accessible complaints process has also been designed, with effective sanctions to ensure that breaches of these standards are investigated and dealt with proportionately and properly.
The supplier will be obliged under the framework to increase the pool of appropriately qualified, experienced and security cleared interpreters beyond the current limits, and to collect and monitor detailed management information to allow better planning for future needs. Failure to do so will result in the supplier being financially penalised.
Moving over to the framework agreement will result in a more efficient and effective service for the public which is forecast to result in savings of at least £18 million on the current yearly spending in this area of £60 million. It will ensure, through the various benefits it offers, that the Government continue to be able to provide access to efficient, high-quality language services for those in need, while getting value for money on behalf of the public.
Posted by PIA at 23:28 No comments: