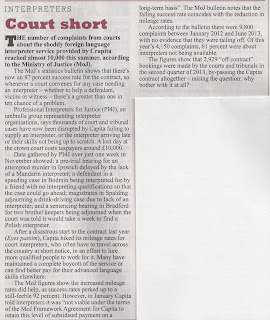 Andy Slaughter (Hammersmith, Labour)
I mention once again the contract for interpreting and translation, which has now been running for two years and which currently—I looked up the latest figures after the last sitting—is fulfilling 88.5% of its contract, which means that about 60 hearings every day face disruption. Almost 10,000 complaints were received between January 2012 and June 2013—39% because the contractor could not supply interpreters, 16% because the interpreter did not attend, 15% because they came late and 4%, the most serious, relating to the quality of interpreting. Moreover, in the second quarter of 2013, there were 23% more complaints than in the same period for 2012. That disastrous contract, which is now resulting in 7% of bookings being made outside the system, should of itself be a sufficient lesson to the Government—despite the Secretary of State’s willingness to “just go for it” on these occasions—to walk before they can run on these matters.

Alex Cunningham (Stockton North, Labour)
I referred to the need of the Secretary of State for Justice to learn from his Department’s failures, and that relates to the language services contract, to which others have alluded. The contract started in 2012 and was branded “shambolic” by the Justice Committee. Coincidentally, the Committee also identified that the Ministry did not have a sufficient understanding of the complexity of court interpreting and translation work before it decided to put those services out to tender.

Andy Slaughter (Hammersmith, Labour)
I am sorry to interrupt my hon. Friend again, but this subject is dear to my heart. When the language contract was originally let—it was a chaos and a farce and it was not performing—we were told by successive Ministers that it was teething troubles. The latest figures from last month show that the number of trials that are failing and the number of interpreters who are not turning up is going up and the performance of the contract is going down again. The performance is about 80%, against a target of 97%.

Alex Cunningham (Stockton North, Labour)
My hon. Friend asks a question, and the next sentence of my speech answers it. The ultimate outcome is translators failing to turn up for trials, causing cancellations. Those that did appear on time frequently mistranslated the evidence. The circumstances around the language services contract led the National Audit Office to recommend that the Ministry of Justice
“implement future contracts so as to minimise transitional problems, for example through piloting”—
funny word that, “piloting”—
“and rolling-out new systems gradually”.
That is sound advice and applicable beyond the bounds of the Ministry, yet the Ministry is running the risk of delivering a parallel scenario of failures with the reform of the probation service, only the consequences pose a more direct threat to public safety.


Interpreter disruption dragging on
Hundreds of court cases a week are being disrupted because of the continued failure of a Ministry of Justice contractor to provide interpreters, official figures have revealed.
Statistics released last week show that the performance of the courtroom interpreter service provided by Capita fell in the first six months of this year compared with the same period last year, while complaints about it have soared.
In the first three months of the contract, which began on 30 January 2012, Capita fulfilled 76% of requests, rising to 92% in the second three months. The figure remained roughly the same for the rest of the year.
New provisional figures show the rate dropped to 86% in the first three months of 2013 and rose to 87% in the second three months.
Overall, in the 17-month period covered by the data – 30 January 2012 to 30 June 2013 – Capita received a total of 195,783 requests for interpreters from courts and tribunals.
On average it fulfilled 88.5% of them, leaving some 22,516 requests unfulfilled, meaning around 60 hearings each day faced disruption.
There were 9,800 complaints about the service from 30 January 2012 to 30 June 2013. Of those 39% (3,786) arose because Capita could not supply interpreters; 16% (1,530) because the booked interpreter did not attend; 15% (1,515) were due to the interpreter attending late; and 4% (410) related to the quality of interpreting.
In the second quarter of 2013 there were 1,957 complaints – 23% more than in the same period of 2012. Most  (64%) concerned interpreters not being available.
For the first time, the statistics show the number of ‘off-contract’ bookings, made where courts and tribunals contact interpreters directly rather than through Capita. In the second quarter of 2013 (the first period for which such data is available) a total of 2,929 off-contract bookings were made, accounting for 7% of bookings.
Justice minister Shailesh Vara (pictured) said that the contract with Capita had saved £15m in its first year. He said ‘dramatic improvements’ have been made over its life and that the ministry continues to ‘drive further improvement in performance’.
A spokesperson for Capita said: ‘We have seen a significant increase in fulfilment rates which are now tracking towards the target level of service required. A continuous programme of improvements is being implemented as we work together with stakeholders and this is showing a positive outcome.
‘The figures for Q3-2013 will demonstrate both a significant improvement to fulfilment rates and a reduction in complaints.’

Justice is lost in translation turmoil


Justice is lost in translation turmoil
The National Audit Office has launched a new investigation into the Ministry of Justice’s outsourcing of court interpreters, after nearly 10,000 complaints about the service offered by contractor Capita.
Judges, barristers and court officials are arguing that the £90m contract is delaying proceedings by up to a year and jeopardising cases, including those involving rape and murder.
They claim interpreters often do not turn up or are so bad they are dismissed. As a result, Margaret Hodge, chairwoman of the public accounts committee (PAC), has started an investigation.
The inquiry will look into the costs incurred by problems with the service and the extent to which courts are bypassing it to find their own interpreters. Last year the PAC released a damning report into how the contract was originally awarded and implemented.
The Ministry of Justice has since insisted that the service has dramatically improved. However, figures released last week showed a 23% increase in the number of complaints in the second quarter of 2013 compared with 2012.
Mary Prior, a barrister in Leicester, said a rape case she is defending has been delayed a year by interpreting problems.
Capita disputed that it was responsible for the delay. The MoJ attributed the rise in complaints to Capita reducing the travel allowances for interpreters in January. The ministry claims this matter has been resolved and expects the service to improve again.


A man accused of an offence of public order has had the case against him adjourned until next month.
Rohan Sivanathan, 37, of Northover, Ilchester, appeared before Somerset Magistrates sitting at Yeovil.

He was charged with using threatening, abusive or insulting words or behaviour likely to cause harassment, alarm or distress during an incident at Yeovil on October 12.
Sivanathan, a Sri Lankan, did not enter a plea and the case was adjourned until December 12 when an interpreter will be present after the court was told there was a "language barrier".
Until his next court appearance the defendant was given bail on condition he does not enter Middle Street in Yeovil.
Posted by PIA at 23:00 No comments: