Judge Michael Carroll slams court translation service Applied Language Solutions
A judge sitting in Maidstone has slammed a private firm's failure to supply a court interpreter just days after official figures revealed the number of criminal cases that have collapsed since their appointment.
Judge Michael Carroll said the behaviour of Applied Language Solutions, appointed by former Justice Secretary Kenneth Clarke in January to provide translators to courts across England, was "so close to contempt of court".
A Slovak interpreter had been booked as far back as August to help defendant Lubomir Chorvat during his trial on a charge of wounding with intent.

However, the case failed to start when it was discovered a Slovak interpreter was not available for the defence team.
Arrangements were hastily made for a Czech translator to assist after the lunch adjournment.
But when the court reassembled, Judge Carroll (pictured above) was told their services had also been cancelled.
Addressing the court, the judge did little to hide his anger.
"We now have a nightmare situation where someone awaiting trial on an extremely serious matter is not able to be told what is happening in his case.
"He has not seen his barrister this morning because of no interpreter and he is being kept in the dark by the inability or unwillingness of a company which is contracted to supply an interpreter and their failure to do so without any kind of explanation to the court.
"This is so close to contempt of court that I feel I should take the matter further."
Before January, courts in England used to rely on local interpreters.
However, ALS was handed the monopoly on translating in the hope it would save the government £18million a year.
Figures from the National Audit Office revealed at the weekend that in the first three months of its contract, 182 magistrate court trials, and an unknown number in crown courts, have collapsed.
A trial is declared "ineffective" if, like Chorvat's, it has to be abandoned on day one. The cost of yesterday's delay was estimated to have cost the taxpayer £8,000.
When the possibility of calling upon the services of an independent interpreter was broached, Judge Carroll remarked: "I am not sure the court has the power to appoint an outside interpreter when a huge amount has already been paid to an agency who refuses to honour their contract."
Despite being assured that a Slovak translator would be available, the judge added he was prepared to report the matter to the Lord Chief Justice.
"Something has to be done," continued Judge Carroll. "Not just something has to be seen to be done, but something has to be done."
Chorvat, 55, of Richmond Road, Gillingham, denies wounding Milan Jankech with intent to cause him grievous bodily harm between June 17 and 18.

Trials collapse as interpreter shortage cripples the court… whose reliance on Google Translate is ‘putting the public safety at risk’
Dozens of trials have been abandoned because of a ‘catastrophic’ shortage of interpreters which has forced courts to rely on Google Translate, MPs have been told.
Ken Clarke’s shambolic outsourcing of legal translation services is blamed for putting public safety at risk after suspects were released back on to the streets when interpreters failed to turn up.
The National Audit Office has found that between January and March this year, 182 trials in magistrates courts, and an unknown number in crown courts, have collapsed.
In one case in Ipswich in March, the failure of a Lithuanian interpreter to appear meant that Google Translate, a comparatively crude and time consuming online translation service, had to be used.
A trial is declared ‘ineffective’ if it has to be abandoned on day one. It is then rescheduled at huge cost to taxpayers, with some defendants having to be freed on bail in the meantime.
The total of 182 does not include other delays caused by the interpreter shortage, such as trials having to be adjourned day after day. Magistrates, solicitors and translators warn that inadequate standards of interpretation could lead to miscarriages of justice and make British courts the ‘laughing stock’ of the world.
Courts across England used to rely on local interpreters but in January this year the former Justice Secretary controversially handed monopoly on translating to a private firm, Applied Language Solutions.
Magistrates have lodged more than 5,000 complaints against the firm after it failed to send interpreters to a fifth of trials, sent people speaking the wrong language, or translators who are simply incompetent. In one case the defendant’s wife acted as an interpreter.
In another, ALS sent a Romanian to translate instead of a Roma speaker. The full depth of the scandal emerged in submissions to a justice select committee inquiry.
MPs were told that a murder trial went ahead with a beautician translating, even though she did not understand the words ‘friction’ or ‘deterioration’.
Standards were allegedly so lax at the firm that a director of another translation company was able to sign up his cat Masha as an ALS translator – and the cat was offered jobs.
Many police forces also use ALS and in Dewsbury, West Yorkshire, three Hungarians had to be released on bail as an interpreter could not be found.
Mr Clarke’s reforms were supposed to save £18 million a year, but a minister admitted in the summer that there will be on savings this year.
A spokesman for Capita, which took over the running of ALS earlier this year, said performance had improved, with more than 95 per cent of bookings now being filled and complaints down.

An Italian man facing an allegation of indecent exposure said to have been committed at Yeovil has had the case adjourned for an interpreter to be present.
[…] No plea was entered and the case was adjourned at the request of the defence because the defendant did not speak any English. Until then his unconditional bail was extended. 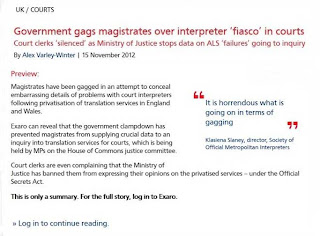 Government gags magistrates over interpreter ‘fiasco’ in courts
Magistrates have been gagged in an attempt to conceal embarrassing details of problems with court interpreters following privatisation of translation services in England and Wales.
Exaro can reveal that the government clampdown has prevented magistrates from supplying crucial data to an inquiry into translation services for courts, which is being held by MPs on the House of Commons justice committee.
Court clerks have also been banned from expressing their opinions on the privatised services.
The justice committee is holding an inquiry after repeated reports of problems since Applied Language Solutions (ALS) became the ministry’s sole contractor for translation services in courts in February.
Peter Beeke, chairman of Peterborough Magistrates court, told Exaro that he had been “forbidden” from providing data to the committee.
The senior magistrate said that he had made a “formal request” to be allowed to provide the committee with monthly reports that he receives on translation services.
But at a meeting with local chiefs in the HM Courts & Tribunals Service (HMCTS), an agency of the Ministry of Justice, he was “formally” told that he could not send copies of the reports to the committee.
He wrote to the committee to explain the position: “As Bench chairman, I receive a monthly report of ALS failures. HM Courts and Tribunal Service has specifically forbidden me from passing that data to this inquiry.”
Magistrates are, however, permitted to give their opinions on the interpreting services. Beeke wrote: “Bearing in mind that I am not allowed to quote in precise detail, the numbers [of problems] remain at an unacceptable level.”
“Magistrates have to put up with this poor service, as do defendants, prosecutors and defence solicitors, and we are powerless to do much about it.”
He warned the committee about relying on statistical reports from Whitehall, saying: “I am told that there is a new logging system for ALS and other service-provider failures. This will only record the amount of court time lost due to such failures.
“This will seriously understate the real cost, but will look good when Whitehall reports to Parliament. You should regard such reports with the greatest scepticism. It will not show extra costs for prosecutors, defence lawyers, secure transport services and custody costs.”
A spokesman for the Ministry of Justice said that statistics on language services are collated centrally “to ensure impartiality, objectivity and integrity, among other requirements.”
The ministry had “strong reasons” to change the system for supplying interpreters, he said. “We remain confident the contract will make the expected saving of £15 million a year for the Ministry of Justice.”
In August last year, the ministry gave ALS the contract to provide all interpreting services for courts in England and Wales. It was part of a ‘framework agreement’ across the justice sector worth £168 million over four years.
Capita Group, the biggest supplier of outsourcing services in the UK, bought ALS last December for £7.5 million, with a possible further £60 million depending on performance over four years. Since October, ALS has been trading under the name Capita Translation & Interpreting.
But the interpreting services have been dogged by problems. A poll in March showed that nine out of 10 court interpreters were refusing to work for ALS, leading to what they see as a fiasco in the supply of translation services in the UK’s criminal-justice system.
A spokesman for the company said: “Our interpreters are qualified to the standards required to provide services to the criminal-justice system,” adding, “Complaints have also fallen dramatically and we shall continue to push for further improvement.”
Klasiena Slaney, director of the Society of Official Metropolitan Interpreters, which represents court and police translators, told Exaro: “It is horrendous what is going on in terms of gagging.”
“Properly trained and qualified interpreters contribute to safeguarding human rights. There needs to be an increased recognition of the standing of the profession. Without this, the existing problems are likely to be perpetuated.”
Geoffrey Buckingham, chairman of another body representing translators in the criminal-justice system, the Association of Police and Court Interpreters, added: “The amount of money that is being wasted in ancillary costs is colossal.”

Alun Cairns (Vale of Glamorgan, Conservative)
To ask the Secretary of State for Justice
(1) pursuant to the answer of 22 October 2012, Official Report, column 681W, on courts: interpreters, whether the figure for complaints includes those requests which were not completed by Advanced Language Solutions due to an interpreter not being available to attend the court or other venue at the required time;
(2) what estimate he has made of the cost to the public purse of disruption of court functions due to unfilled bookings.

Helen Grant (Maidstone and The Weald, Conservative)
The published statistics relate to completed requests between 30 January and 31 August 2012, and include requests where ALS was not able to send an interpreter or where an interpreter did not attend. The complaints figures relate to completed requests, where a complaint was recorded. Not every instance of a failure to supply to an interpreter results in a complaint, and this is reflected in the published statistics.
The estimated cost for all agencies of an ineffective trial in the magistrates court is around £650 and the Crown court is £1,500 for all agencies. Comparing the number of ineffective trials in the criminal courts due to the availability of an interpreter the first quarter of 2011 to the same period in 2012, the additional costs have been estimated to be approximately £60,000. It is not possible to quantify costs for the disruption of non-trial hearings (e.g. case management hearings) due to interpreter availability.