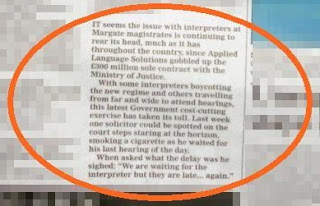 It seems the issue with interpreters at Margate magistrates is continuing to rear its head, much as it has throughout the country since Applied language Solutions gobbled up the £300 million sole contract with the Ministry of Justice.
With some interpreters boycotting the new regime and others travelling from far and wide to attend hearings, this latest Government cost-cutting exercise has taken its toll. Last week one solicitor could be spotted on the courts steps staring at the horizon, smoking a cigarette as he waited for his last hearing of the day. When asked what the delay was he sighed: "We are waiting for the interpreter, but they are late… again".


"A man charged with driving with excess alcohol had his case adjourned to September 6 by Spalding magistrates on Thursday because an interpreter’s car had broken down on the way to court."

Judge criticises interpreter firm for trial delays
A judge has hit out at the company that provides translators in legal cases, saying its failure to provide reliable interpreters was a “plague” on the courts.
Judge David Ticehurst said the service provided by Applied Language Solutions had been “dreadful” because too often interpreters had not turned up, turned up late and on some occasions been “incompetent”.
After the case of a cannabis gardener had to be postponed due to an interpreter being repeatedly late, Judge Ticehurst summoned ALS to court for a hearing to determine a “wasted costs order”.
Judge Ticehurst said: “Since ALS took over the contract, the courts have been plagued by a failure of interpreters to turn up, and not be as good at English as they should be.
“Family cases have had to be adjourned, as have criminal cases.
“When an interpreter is incompetent, late or fails to turn up, ALS says ‘it’s nothing to do with us’.”
Her Majesty’s Courts and Tribunals Service has a legal obligation under the Human Rights Act to provide interpreters.
ALS was appointed by the Ministry of Justice to have sole control of the contract for courts and tribunals in England and Wales on January 30.
But Judge Ticehurst said if it was up to him he would terminate the contract.
The barrister representing ALS, David Scutt, argued the company was doing everything it could to provide a reliable service.
But the judge argued: “What are they (ALS) getting paid for? Finding an interpreter who may or may not turn up on time?”
Under the Supreme Court Act 1981, judges have the power to order a party or legal representative to meet “wasted costs”. The court must give them a reasonable opportunity to attend a hearing to give reasons why it should not make such an order.
The case in the order against ALS was that of Men Pham, a 54-year-old Vietnamese woman who speaks no English.
On the day the case was first listed for sentence, July 17, the interpreter was 44 minutes late, having come from London. By the time the case was able to be called, the judge was in the middle of a trial so had to adjourn it until August 14.
A request was made for the case to be heard at 2pm that day to allow for an interpreter’s travel time, yet still he was half an hour late, this time coming from Cardiff.
The case finally concluded at 3.10pm, when Pham was given a one-year suspended prison sentence and a six-month curfew.
Deciding not to make the costs order against ALS, Judge Ticehurst said: “I’m sure that, in future, ALS will ensure that any interpreters will appear in court, on time, not late.”
It is not clear how much money had been wasted by the delays.
On its website, ALS states it is “dedicated to providing high quality professional language translation service – at excellent prices”.
A company director declined to comment after the hearing.

Cost Cuts 'Pressure Court Services'
[…] Additional problems have also been reported about interpreters, with Napo members saying they are failing to turn up at court and can be under-prepared and under-qualified, getting key information wrong.
Applied Language Solutions has already faced criticism since it won the contract to provide court interpreters, but the Ministry of Justice said it has seen improvements in the past few months.[…]

http://www.express.co.uk/posts/view/342007/Justice-in-the-dock-as-cuts-unleash-chaos
The absence of interpreters is routinely leading to court cases being adjourned.