"These kinds of issues are now rare" 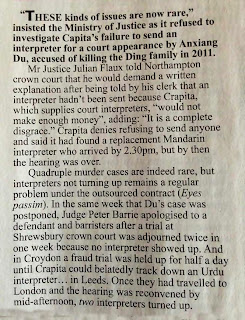 Case adjourned to find interpreter
A Lithuanian man facing charges of driving without insurance or a licence at Street has had his case adjourned for an interpreter to be present.
Darius Poskus, aged 21, of Anthony Road, appeared before Somerset Magistrates sitting at Yeovil charged with the two offences alleged to have been committed at Glaston Road on October 9 last year.
Due to difficulties in the defendant's comprehension of the court proceedings the matters were adjourned until June 3 so he could have the assistance of an interpreter. Until then he was released on unconditional bail.


Legal aid contracts just won’t work
[…] "But given the Ministry of Justice’s lamentable track record, the chances that they will go according to plan are just about nil. When the ministry introduced a far simpler scheme to centralise bookings for legal interpreters the result, as we all now know, was courtroom chaos that continues to this day.
The winner of the interpreting contract, an Oldham company, Applied Language Solutions (ALS), promised huge savings by using unqualified interpreters, and duly delivered a widely predicted disaster.
The whole fiasco was described by Margaret Hodge, chair of the Public Accounts Committee: “… Total chaos... there has been a sharp rise in delayed, postponed and abandoned trials; individuals have been kept on remand solely because no interpreter was available; and the quality of interpreters has at times been appalling. Despite this, the Ministry has only penalised the supplier a risible £2,200. This is an object-lesson in how not to contract out a public service.”
The ministry’s handling of the ALS contract has been so cack-handed — and still is — that it is impossible even to guess the amount of money wasted in adjournments and unnecessary remands, to say nothing of the misery and injustice caused to witnesses and defendants. Many interpreters have simply packed up and left the profession to the unqualified and untrained amateurs that the “reformed” system now relies upon.
The ALS scandal involved a single contract intended to save £5 million. It only affected the small fraction of cases in which interpreters are required. The mind boggles at the thought of the same ministry being let loose on 400 separate contracts, in a scheme affecting practically every criminal case in the country.
Before signing the ALS contract the Ministry of Justice was warned that it would be a disaster. It ploughed on regardless. It is heading for a far bigger disaster now, and it cannot say that it was not warned."


Government won’t investigate Du interpreter fiasco
The Government has said it will not investigate a firm which failed to send a Mandarin interpreter for a court appearance of murder suspect, Anxiang Du.
Capita, the firm contracted by the Ministry of Justice to provide foreign interpreters in courts, was branded a “disgrace” by a High Court Judge last week after Du’s latest court appearance had to be adjourned.
Du, aged 54, was due to enter pleas for charges of murdering Jifeng Ding, his wife Helen, and their two children Xing, aged 18, and Alice, aged 12.
During the plea and case management hearing at Nottingham Crown Court, at which Anxiang Du was present, the High Court Judge explained he had asked for an interpreter to be booked.
However, he said the firm indicated it was not worth sending one as they “would not make enough money” from the hearing.
A Ministry of Justice spokesman said: “We have worked with Capita to make dramatic improvements in the interpreter service, saving taxpayers £15 million last  year. These kinds of issues are now rare.”
The court heard the firm had been ordered to send an interpreter, but when the hearing started at 2pm there was no interpreter present and therefore no pleas were entered.
The Mandarin interpreter did eventually arrive at about 2.30pm, but the hearing had already finished and she left the court precincts soon afterwards.
Mr Justice Flaux said: “To say that the presiding judge of the court is annoyed about this is an understatement.”
Instead a fresh plea and management hearing is to be held at Northampton Crown Court in July.
Northampton North MP, Michael Ellis, himself a barrister, labelled the debacle as an “outrage and a disgrace”.
However, a Capita spokesman denied the firm had refused to send an interpreter.
He said: “After the original interpreter booked to attend the hearing was unable to attend, Capita worked to secure a replacement.
“The replacement interpreter could not attend until 2.30pm and we communicated this, in good time, to the court. Capita at no time refused to arrange an interpreter to attend Nottingham Crown Court on cost or any other grounds.”

http://www.lawgazette.co.uk/news/court-interpreters-reject-new-contract-deal
20 May 2013 by Catherine Baksi


Court interpreters reject new contract deal
Courts are being disrupted on a ‘daily basis’ as interpreters continue to boycott the private sector contract for translation services, despite a peace move by the Ministry of Justice, an interpreters group claimed this week.
The ministry last month revealed that it would foot the bill for a 22% rise in payments made to court interpreters in a bid to attract more to work under a controversial contract with Capita that has been blamed for widespread disruption over the past 15 months.
Professional Interpreters for Justice, an umbrella group of interpreters’ organisations that oppose the contract, said their members have rejected the new deal and will still not work for the company.
The group wants to see the contract, which has been criticised by two high-profile parliamentary committees and the National Audit Office, scrapped.
The group claims that ‘incidences of interpreter no-shows and poor-quality interpreting’ are disrupting courts on a ‘daily basis’.
A hearing in a quadruple murder case at Nottingham Crown Court was postponed this month after a Mandarin interpreter booked for defendant Anxiang Du failed to turn up.
Mr Justice Flaux told the court that his clerk had received a message saying it was ‘not worthwhile’ for the interpreter to turn up because they ‘would not make enough money’. He described the situation as ‘a complete disgrace’.
A Capita spokeswoman said the firm at no time refused to provide an interpreter on ‘cost or any other grounds’.
She said: ‘After the original interpreter booked to attend the hearing was unable to attend, Capita Translation and Interpreting worked to secure a replacement.
‘The replacement interpreter could not attend until 2:30pm and we communicated this, in good time, to the court.’