Double assault at Gower College Swansea's Tycoch campus - case adjourned for Arabic translator
A court case involving an alleged double assault at a college has been adjourned while an interpreter is found.
Osama Osman, aged 21, of Henrietta Street, Swansea, is accused of assaulting two people at Gower College Swansea's Tycoch campus on August 28. No pleas were entered during a brief hearing before city magistrates.
Osman's solicitor, Stewart John, said that while his client had a decent level of English he would need an Arabic translator before the proceedings could continue.

‘Asian women in Oxford facing barriers to see their GP’


‘Asian women in Oxford facing barriers to see their GP’
ASIAN women in Oxford face too many barriers to access their GPs, according to a watchdog report.
Language issues, a lack of Asian doctors and not enough community-based services are the main issues, Healthwatch Oxfordshire said.
A survey of 101 Asian women in the city found 62 said they found it hard to access medical services.
They said language barriers made them feel unwelcome, they felt unable to talk to male staff and it was difficult to get transport.
One told researchers: “Communicating with my GP is a real issue as I do not understand his language and culture and he does not understand mine.
“I have to rely on my husband to interpret for me.”
The report was funded by the official health and social care watchdog and was carried out by the Asian Women’s Group (AWG).
Lead researcher and AWG chairwoman Aziza Shafique said: “People who can’t speak English need more interpreting services.
“GPs should identify whose patients who have got a language barrier and produce an interpreter for them when they have appointments.
“At the moment people are translating through their family which is very embarrassing and also stops their confidentiality.
“It means if there’s anything they don’t want their family to know, they don’t tell anyone. It compromises their rights.
“GP practices need to hire more diverse doctors that maybe are from Asian background or from a similar culture, who are able to speak the language and understand the religious needs.
“They also need to highlight which of their doctors speak different languages and are from Asian cultures so women know.
“I understand there are cuts and fewer resources, but they need to be more creative with the resources they do have.”
She said another issue is the distance people have to travel to surgeries and more community-based services would help.
She added: “Doctors need to be more flexible about where they deliver their services.
“They should go and hold sessions in community centres and children’s centres, maybe as drop-in sessions.”
NHS England spokeswoman Natalie Hagan said: “All GP practices are required to access translation services for their patients and we will be following up the concerns raised in this report.
“We will work with practices to ensure they are meeting the needs of all patients and the local community.”

Lost in translation: it’s time that outsourcers were brought to justice


Lost in translation: it’s time that outsourcers were brought to justice
[…] But here’s one issue and it relates to most of our most strategically important companies, given outsourcing’s role in essential services: Capita.
Deep within a 70-page policy paper to be put before the Liberal Democrat  conference next month is a call for the party to “undertake an urgent review of procurement within the Ministry of Justice with the aim of improving the process of procurement, the nature of suppliers selected, and the structure of the contracts”.
Senior grass-root Lib Dems note that the Justice Select Committee, which is chaired by the party grandee Sir Alan Beith, was “scathing” about a number of contracts, in particular one involving the provision of court interpreters.
The paper argues that under the contractor, Capita, the interpreters “appear to be costing more money and yet [have] reduced service delivery to an unacceptably low level”.  For example, the cost of hiring translators to help non-English speakers at crown or magistrate courts nearly doubled from £7.9m in 2012 to £15.5m a year later.
Post-outsourcing fiascos included the bizarre instance of an “interpreter” at a murder trial in Winchester, who admitted he was standing in for his wife after a fair few linguistic blunders. Ministry of Justice procurement is a “car crash”, grumbles a Lib Dem lawyer.
Payments totalling a little more than £46,000 were withheld from Capita’s translation and interpreting arm between May 2012 and November 2013 – a tame penalty for a series of serious failures on a contract that was supposed to save the taxpayer £18m a year.
The Lib Dems blame many of the Ministry of Justice’s procurement problems – which also include Serco and G4S charging fees for tagging non-existent offenders – on the Conservatives and also the civil servants who oversaw botched contract negotiations under the last Labour government. But in coalition, the party has always had a minister in the department and they can’t escape a degree of culpability. If passed, an urgent review would become party policy, but would not necessarily be included in the manifesto.
Even if it does, let’s hope that the current Lib Dem justice minister, Simon Hughes, presses for that review to get started now. It would be wrong to save this as an election pledge on the off-chance that lightning will strike twice – in a row – and the party gets another shot at power-sharing.


Bogus interpreter threatened to scupper choirgirl inquest
The inquest into the death of a choirgirl stabbed more than 50 times by her obsessive ex-boyfriend nearly collapsed today (thurs) after a bogus interpreter was used in court. Arsema Dawit, 15, was killed by Thomas Nugusse in the lift of the block of flats where she lived with her family on June 2, 2008. Her Eritrean born mother, Tsehaynesh Medhane, had been giving evidence in her native Tigrigna language at the dead schoolgirl's inquest at Southwark Coroner's Court. When Ms Medhane's family raised concerns that the Tigrigna interpreter was not translating her evidence correctly, it was discovered that she was speaking through an unaccredited court translator. 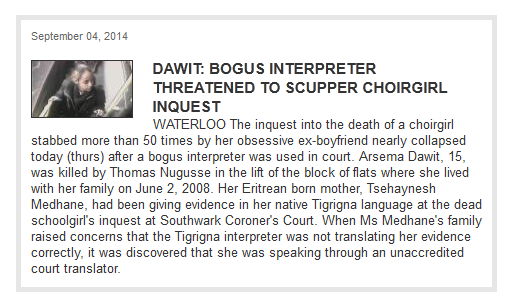