Report "A fair deal for Interpreters"

Report "A fair deal for Interpreters" - an independent survey on the impact of the MOJ’s plans to outsource legal interpreting services.

Thanks to a colleague's complaint to the Press Complaints Commission, the Daily Telegraph has published a correction today on Page 2. 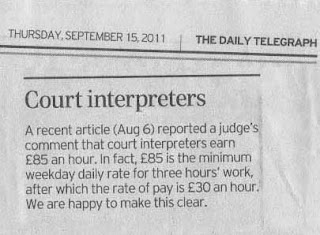 12 Sep 2011
Interpreters: Training
Justice
Graeme Morrice (Livingston, Labour)
To ask the Secretary of State for Justice what steps his Department is taking to ensure that interpreters employed in the criminal justice system have professional qualifications.
Crispin Blunt (Parliamentary Under Secretary of State (Prisons and Probation), Justice; Reigate, Conservative)
As I announced in a written ministerial statement I made to the House on 15 September 2010, Hansard, columns 46-47WS, we are reforming the delivery of interpretation and translation services across the justice sector. This will primarily affect England and Wales.
A framework agreement with a single supplier was signed by the Ministry of Justice on 24 August 2011. This document includes clear quality standards specifying the qualifications and experience required for interpreters to work in the justice sector.
Posted by PIA at 16:27 No comments:

Unite campaign backs public service interpreting
Trade union Unite is to launch a campaign to support public service interpreting and ensure that properly trained translators are used by criminal justice agencies.
The campaign, Speak Up, Speak Out, follows the decision by the Ministry of Justice in July to contract with a single commercial agency, Applied Language Solutions, to provide translation and interpretation services to criminal justice agencies, dispensing with the requirement for registration with the Register of Public Service Interpreters and its sign language equivalent.
To date, public bodies such as the courts and police have contacted interpreters directly using the national register, which only lists qualified and security-vetted professionals.
Interpreting unions including NUPIT, the translators and interpreters branch of Unite, fear the government’s new arrangements will reduce the quality of services and harm the interests of those engaging with the criminal justice system.
Their campaign will seek to persuade the government to retain the national register and ensure a properly regulated public interpreting service.
An MoJ spokesman said: ‘We currently spend in the region of £60m a year on interpretation and translation services. This new framework will substantially cut that bill, by reducing inefficiencies, while still ensuring high quality interpreters and translators are available to those in need.’
Applied Language Solutions has previously pointed out that all work is done by appropriately qualified interpreters.
Posted by PIA at 15:50 No comments:

West Midlands Police to cut £750k from budget for translators

West Midlands Police to cut £750k from budget for translators
West Midlands Police is to cut 40 per cent off the £1.8 million a year it spends paying interpreters to communicate with non-English speaking offenders.
The force, which has to save £126 million over four years as part of Government budget cuts, said it can save at least £750,000 a year by changing the way it employs translators.
The force spends £1,898,000 on interpreters, who are used at police stations and in courts to translate more than 100 different languages.
Senior officers said the overhaul will end lucrative pay and perks packages.
But some interpreters said they were being forced out of the profession because the new contracts will halve rates of pay and removes travel expenses when it is introduced next month.
They have branded the cost-cutting overhaul as “dangerous”, claiming the changes could lead to the use of lesser qualified translators and the possibility police and court cases could collapse.
The force was due to discuss the changes at a meeting with interpreters at Tally Ho! in Edgbaston, Birmingham, this week. Under the current structure, officers would arrange interpreters to cover cases, without knowing how long they have been qualified, how they are rated or how close they are to the station.
The interpreters would then get paid while they travelled to the station and were guaranteed a minimum two hours payment whether they were needed for that long or not. Police could also find themselves paying for a court-level interpreter to simply tell a suspected offender what was going to happen to them in custody.
Now private firm Applied Language Solutions has been awarded a contract by the Ministry of Justice to manage interpreting services for the criminal justice system. West Midlands Police said the firm would find the nearest and most suitable interpreter for its needs.
Under the new deal, interpreters would see their hourly rates cut by as much as half, from £32 to a minimum of £16, the abolition of a minimum two-hour payment and the removal of travelling time payments and travel expenses.
It will also require the interpreters to sit a mandatory test, which they will have to pay £100 to sit. Marie Adamova, who has been working as an interpreter in Birmingham for the last four years, is worried about the changes.
The 46-year-old from the Czech Republic said: “My household will be in danger because of these changes and I may have to leave the profession.
“They can call you out at any time of the night or early morning and you have to leave straight away.
“If I am receiving £16 and there is no payments for travel time, parking or petrol, I will not be able to continue.
“But my biggest worry is that the most qualified and experienced interpreters will be forced to leave the profession.
“If they only attract students, or people who are not as well qualified, it increases the risks of errors and mistakes. If there is misinterpretation it is very serious.”
Ms Adamova, who has a Masters degree and a diploma in public service interpreting, added: “I think they should have consulted with us about cutting costs and maintaining standards.”
Another interpreter, who did not want to be named, said: “The system is being ripped apart by a bunch of accountants. If cheaper, less experienced and less qualified people are used there is a very serious risk of police and court cases collapsing at huge cost to the taxpayer.”
Chief Supt Steve Anderson, from West Midlands Police’s community justice & custody department said: “We do recognise that many of our interpreters have given excellent service to West Midlands Police and feel nervous about the new arrangements, but we are confident that over the next couple of months their fears will be allayed.”
Posted by PIA at 15:34 No comments: 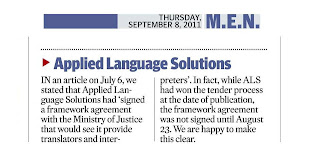 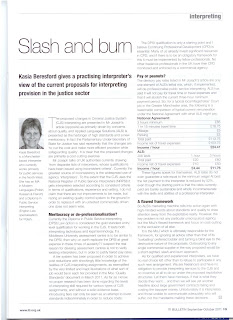 "Slash and burn" (a practising interpreter's views)
ITI Bulletin, September-October 2011
Posted by PIA at 11:41 No comments: