Call for end to court interpreting contract chaos
Freelance court interpreters in the East Midlands are calling on the Government to end what they describe as “chaos and confusion” over plans to hand a £60 million contract for language services in the courts, tribunals and some police services to a commercial agency.
In July, Justice Minister Crispin Blunt MP made an announcement to Parliament that the Ministry of Justice intended to place a huge “framework contract” to provide interpreting and translation services in the criminal justice system to an agency. A Manchester-based company, Applied Language Solutions then started to claim that it had won the contract, however, the Ministry of Justice has so far not confirmed this, or made any other announcement.
Now, the Interpreters are calling for the Ministry to come clean over exactly what is going on. Yelena McCafferty, a Lincolnshire-based National Register Interpreter said “this has become a farce. Applied Language Solutions is recruiting linguists for a contract that does not appear to exist. The Company is trying to hire linguists for the courts and some police services, offering appalling terms and conditions. On some assignments, the effective rate of pay would fall below the minimum wage”.
Applied Language Solutions appears to have changed the terms and conditions for the interpreters it is trying to sign up at least 3 times in the space of month. It also says that linguists who want to work in the criminal justice system need to be re-tested by Middlesex University, but has revealed few details of how this will be done, who the examiners are and exactly how much they will charge interpreters for the exam.
Many qualified interpreters in the East Midlands, who are on the National Register of Public Service Interpreters currently used by the Courts Service, are refusing to sign up with the agency.
Yelena McCafferty added “we have a situation where there does not appear to be a formal contract award, a vague plan to force interpreters to be retested and a company which changes its terms almost on a weekly basis. The Ministry of Justice should clarify what is going on with the National Framework Contract, to end what appears to us to be a confused mess”.
An open letter has now been sent to the Ministry of Justice calling for it to make a clear, public statement to end the unease and uncertainty over the future of interpreting services. 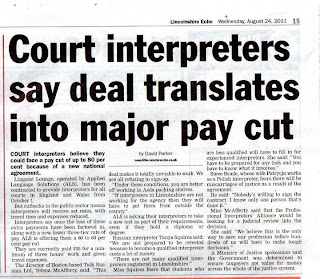 http://www.thisislincolnshire.co.uk/Court-interpreters-face-huge-pay-cut-new-plans/story-13190969-detail/story.html
August 24, 2011
'Major pay cut' for court interpreters in Lincolnshire
COURT interpreters in Lincolnshire face a dramatic pay cut as a result of a new national database.
Linguist Lounge, operated by Applied Language Solutions (ASL), have a framework agreement to provide interpreters for all courts in England and Wales from October 1.
But interpreters say that ALS are offering them a 60-80 per cent pay cut when factoring in travel time and costs.
They are currently paid £85 for a minimum of three hours' work. They are also given travel expenses.
However, ALS will not be offering travel expenses and will be offering a new, lower three-tier rate of pay.
Director of Boston-based Talk Russian Ltd, Yelena McAfferty, said: "This deal makes it totally unviable to work. We are all refusing to sign up.
"Under these conditions, you are better off working in Asda packing shelves.
"If interpreters in Lincolnshire are not working for the agency then they will have to get them from outside the county."
ALS are asking their interpreters to take a new test as part of their requirements, even if they hold a diploma or degree.
Russian interpreter Tanya Squires said: "We are not prepared to be re-tested because to become a qualified interpreter costs a lot of money.
"There are not many qualified interpreters registered in Lincolnshire."
Miss Squires fears that students who are less qualified will have to fill in for experienced interpreters.
She said: "You have to be prepared for any task and you have to know what it involves."
Steve Brade, whose wife Patrycja works as a Polish interpreter, fears there will be miscarriages of justice as a result of the agreement.
He said: "Nobody's willing to sign the contract. I know only one person that's done it. It seems ASL have taken the contract on without having anyone in place.
"There are already businesses in Scotland who have similar agreements and there have been miscarriages of justice reported in Scotland."
His wife Patrycja Walewska-Brade said that to become a qualified interpreter already costs thousands of pounds.
She said: "Basically we are going to be working for free."
Miss McAfferty said that the Professional Interpreters' Alliance will be looking for a judicial review into the decision.
She said: "We believe this is the only way to save our profession before hundreds of us will have to make tough decisions."
A Ministry of Justice spokesperson said: "The Government is determined to ensure taxpayers get value for money across the whole of the justice system. We have announced that we will cut interpretation costs by at least £18 million a year, whilst still ensuring high quality interpreters and translators are available to those in need."
Posted by PIA at 23:56 No comments:

Tribunals’ translators walk out in row over contracts 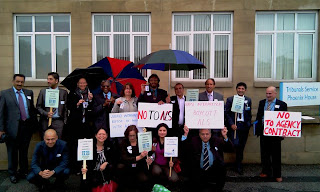 http://www.yorkshirepost.co.uk/news/at-a-glance/main-section/tribunals_translators_walk_out_in_row_over_contracts_1_3676543
13 August 2011
Tribunals’ translators walk out in row over contracts
Interpreters staged a walkout at Bradford Asylum and Immigration Tribunals yesterday in protest at Ministry of Justice plans to contract with one supplier to provide language services at courts and tribunals.
More than a dozen interpreters registered their resistance to the proposals by protesting for over an hour under banners saying “No to Agency contracts” and “Interpreters United against Agencies” and further demonstrations are planned elsewhere in the coming weeks.
The Ministry of Justice could also face a legal challenge to its new cost-cutting arrangements for the provision of interpretation and translation services.
After a 12-month procurement process Manchester-based Applied Language Solutions (ALS) was selected for the contract to provide the services and a judicial review is being considered against that decision.
A spokeswoman for the MOJ said: “Interpreters and translators provide a vital service, ensuring speakers of all languages have equal access to justice.
“The Government is committed to maintaining the high quality of these services, but believes the same level of service can be achieved for less.
“We are in the process of finalising a framework agreement with a commercial provider, which will streamline the system of sourcing and booking an interpreter, saving money and staff time. We are working to ensure all cases are heard efficiently.”
But many independent interpreters say they do not want to be agency workers and fear standards will be lowered with cuts in pay and fewer security safeguards leading to miscarriages of justice.
Madeleine Lee, speaking for the Professional Interpreters’ Alliance, said the Bradford protest was aimed at raising awareness among lawyers and the public of professional freelance interpreters opposition to the plans.
“Professionally qualified, registered court interpreters are concerned that the Ministry’s proposed framework agreement will lead to a drop in interpreting quality as they risk being replaced by unqualified bilinguals.”
But a spokeswoman for ALS maintained: “ALS has demonstrated that it has the experience and the ability to deliver a reliable, quality service.
“Centralisation of bookings makes it possible to efficiently and fairly distribute the work available for each language in a given region.”
Posted by PIA at 23:42 No comments: 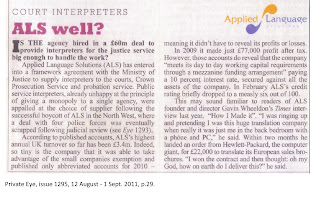 Court Interpreters
ALS well?
Is the agency hired in a £60m deal to provide interpreters for the justice service big enough to handle the work?
Applied Language Solutions (ALS) has entered into a framework agreement with the Minister of Justice to supply interpreters to the courts, Crown Prosecution Service and probation service. Public service interpreters, already unhappy at the principle of giving a monopoly to a single agency, were appalled at the choice of supplier following the successful boycott of ALS in the North West, where a deal with four police forces was eventually scrapped following judicial review (see Eye 1293).
According to published accounts, ALS’s highest annual UK turnover so far has been £3.4m. Indeed, so tiny is the company that it was able to take advantage of the small companies exemption and published only abbreviated accounts for 2010 – meaning it didn’t reveal its profits or losses.
In 2009 it made just £77,000 profit after tax. However, those accounts do reveal that the company “meets its day to day working capital requirements through a mezzanine funding arrangement” paying a 10 percent interest rate, secured against all the assets of the company. In February ALS’s credit rating briefly dropped to a measly six out of 100.
This may sound familiar to readers of ALS founder and director Gavin Wheeldon’s Times interview last year, “How I Made it”. “I was ringing up and pretending I was this huge translation company when really it was just me in the back bedroom with a phone and PC,” he said. Within two months he landed an order from Hewlett-Packard, the computer giant, for £22,000 to translate its European sales brochures. “I won the contract and then thought: oh my God, how on earth do I deliver this?” he said.
Private Eye, issue 1295, 12th August, page 29.
Posted by PIA at 23:41 No comments: