Interpreters win NHS apology for pay ‘error’
National Health Service chiefs have launched an investigation and apologised for a “mistake” after a new privately-run booking service left interpreters struggling without pay for weeks.
The Central and North West London NHS Trust, which commissions the interpreting service in the borough, admitted an “error” with unprocessed time-sheets “should not have happened”.
Interpreters have told the West End Extra that they have been left “desperate for money” and unable to pay their rent and bills.
A spokesman for the NHS trust said: “CNWL apologises for this, we will pay people what they are owed. The mistake is being corrected and after our investigation there will be greater clarity around all the issues involved.”
Interpreters are hired by the NHS to go GP surgeries and mental health centres in Westminster to explain complex diagnoses and clinical information to patients who do not have English as their first language.
Dozens have signed a petition against the new booking system, run by Hull-based private company Language is Everything.
The petition says interpreters have a “history” with the company over late payments to them from back in 2013, and many have had to chase up their wages through the courts.
The petition to CNWL adds: “We find it morally wrong that you are asking us to work for the same people that have humiliated our colleagues by not paying them.”
A CNWL statement added: “We are aware of the difficulties Language is Everything had in 2013. “They told us they were entering into a legal mechanism called a Company Voluntary Agreement to deal with them. We were satisfied that the company was financially viable.”
Language is Everything was unavailable for comment. 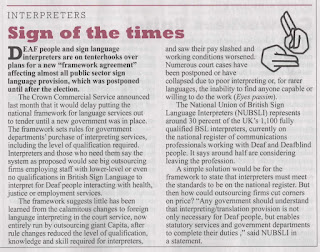 
Courts Service pays more than €1m for interpreters
Yoruba, Cebuano, Lingala, Iloko and Tagalog were some of the obscure, exotic and far-flung languages spoken by those accused of offences before the courts in Ireland last year.
The Courts Service confirmed on Sunday, in response to a Freedom of Information request, that the bill for providing interpretation services for 68 languages in the courts during 2014 totalled just over €1 million. The figures show that most of the fees were paid to Forbidden City Ltd (or their trading name, translation.ie), which received €832,324.
According to the Courts Service, Polish was the language interpreted most often last year in the courts, with interpreters required on 2,151 different occasions, accounting for 28.8 per cent of the languages interpreted.
This was followed by the demand for Romanian interpreters, who were required 1,367 times in court, making up 18.3 per cent. The other languages to feature in the top 10 were Lithuanian (14.8 per cent), Russian (9.9 per cent), Mandarin (4.5 per cent), Latvian (3.4 per cent), Vietnamese (2.6 per cent), Portuguese (2 per cent), Arabic (1.7 per cent) and Czech (1.5 per cent).
Posted by PIA at 23:00 No comments:

Email ThisBlogThis!Share to TwitterShare to FacebookShare to Pinterest
Labels: Outsourcing in Ireland


Independent review of the standards in the framework for the delivery of interpreting and translation
The UK Ministry of Justice (MOJ) appointed independent assessors (Matrix Knowledge, now Optimity Matrix) to carry out an independent review of the quality standards in respect of the Framework Agreement for the delivery of interpreting and translation (I&T) services across the justice system. Of the five recommendations, the MOJ accepted one.


The ongoing fiasco of privatised court interpreting services
“Three years after Capita took on a Ministry of Justice contract to provide interpreting services in courts and tribunals, recent cases and an independent review have demonstrated that it is still failing, with serious consequences.”