European Parliament: Petition 0361/2012, on application by the UK of Directive 2010/64/EU on the right to interpretation and translation in criminal proceedings
http://www.europarl.europa.eu/sides/getDoc.do?type=COMPARL&reference=PE-496.629&format=PDF&language=EN&secondRef=01

In search of justice 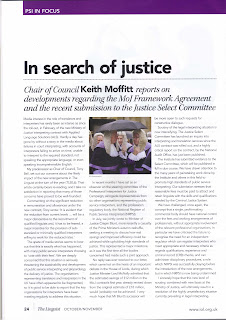 
"The trial was originally listed for up to three weeks but, after a series of problems over Lithuanian interpreters, it lasted for three-and-a-half weeks."


‘Shocking failings’ of court contract
A Parliamentary committee is to hold an inquiry into the “shocking failings” of the Saddleworth company awarded a five-year government contract to provide translation services to the nation’s justice system.
Applied Language Solutions has come under repeated attack since it won the contract last year. The latest, from the National Audit Office, labelling the performance “wholly inadequate”.
The Public Accounts Committee will hold a hearing into the alleged failings on October 15. Its chairman, Labour MP Margaret Hodge said in a letter: “The NAO inquiry has uncovered some shocking failings.”
Geoffrey Buckingham, chairman of the Association of Police and Court Interpreters, wants the contract terminated.
He said: “The NAO report provides the evidence that the private contract given to ALS should never have been awarded.”
The NAO report said ALS had not recruited and assessed sufficient interpreters.
The company was set up nine years ago by businessman Gavin Wheeldon from his bedroom, but bought by professional services firm Capita last December for £7.5 million.

Valerie Vaz (Walsall South, Labour)
What assessment he has made of the effectiveness of the language services for courts provided by Applied Language Solutions.

Helen Grant (Maidstone and The Weald, Conservative)
The hon. Lady may be aware of problems that occurred when the contract started in January, but the National Audit Office’s recent report, published on 12 September, showed that ALS was filling 95% of its bookings and complaints had fallen. The Department continues to monitor the performance of ALS against the key performance indicators. We published a statistical report in May and plan to publish an updated report later in the year.

Valerie Vaz (Walsall South, Labour)
I thank the Minister for her response and welcome her to her post. She brings a unique expertise to the team. May I also pay tribute to Mr Clarke? He was a good Lord Chancellor.
The Minister will be aware that there is a legal duty under the Human Rights Act to provide interpreters, and a judge last month said ALS was dreadful—a plague on the courts and incompetent. What steps will the Minister take to ensure there is no waste of public money in delayed and adjourned cases?

Helen Grant (Maidstone and The Weald, Conservative)
The Ministry of Justice acted quickly to put a plan in place when it became obvious that there were performance problems. We are not being complacent and we will continue to monitor performance, but we are seeing some substantial improvements. The framework with ALS is intended to provide better value for money. It also provides an opportunity to reduce a great deal of
the administrative burdens that were placed on the justice agencies under the old system. The contract is also expected to save the Ministry of Justice in the region of £15 million a year.

Andy Slaughter (Hammersmith, Labour)
The Minister must be irritated to be spending her first few days in office reading NAO reports detailing her predecessor’s cock-ups. Does she agree with the Chair of the Public Accounts Committee that the NAO inquiry into the language service contract has uncovered some shocking failings which have had a dreadful impact on clients of the Court Service and people who work in the interpretation service? If she does, will she now suspend the contract with Applied Language Solutions, or is she happy to see interpreters with no experience, qualifications or criminal records checks being used in serious and sensitive criminal cases?

Helen Grant (Maidstone and The Weald, Conservative)
I do not agree with that. We are seeing significant improvements—

Helen Grant (Maidstone and The Weald, Conservative)
Yes we are, and the Opposition also need to accept that the NAO report accepted that the Government had good reasons for making changes from the old system.

John Cryer (Leyton and Wanstead, Labour)
Further to Question 6, is there any indication that any prisoner has received an inappropriate sentence because of the failings of Applied Language Solutions, given that, as the Under-Secretary of State for Justice, Mrs Grant said, it has failed to fulfil 5% of its bookings even after the improvements that she talked about?

Chris Grayling (Minister of State (Employment), Work and Pensions; Epsom and Ewell, Conservative)
We have seen no such evidence. If the hon. Gentleman has a constituency case that he wants to bring to us, he should feel free to do so.